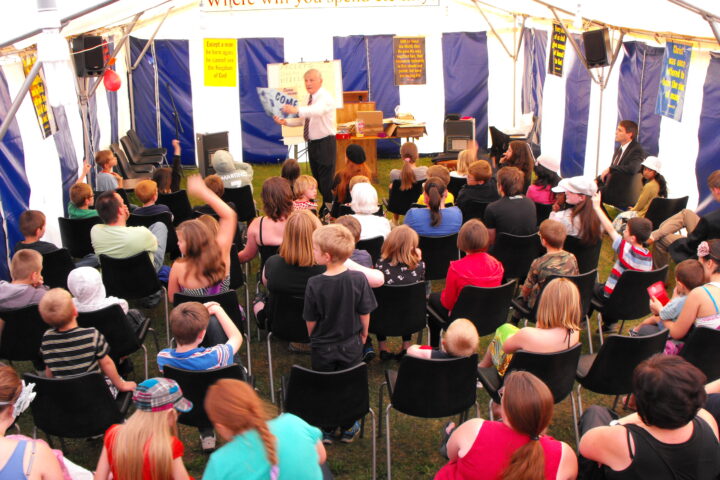 GOSPEL TENT 2011 – Dan Gillies preaches on the question “What is man?” (Psalm 8) and finds him to be small, special, sinful, yet save-able. Terry Topley closes with a powerful warning to sinners to awake and repent, and not to tempt God to intervene with an earthquake (Messages preached 24th Aug 2011)
Aug 23, 2011

GOSPEL TENT 2011 – Terry Topley preaches a touching message on “the Son of God who loved me and gave Himself for me”. Dan Gillies follows with a solemn warning of lost time, lost opportunity and lost hope from Jer 17:9 (Messages preached 23rd Aug 2011)
Aug 22, 2011

GOSPEL TENT 2011 – Dan Gillies preaches on a garden of tragedy (Eden) and a garden of triumph (the resurrection garden). Terry Topley closes with a stirring message on three swords: the swords of government, grace and goodness, from Gen 3, Zech 13 and Isa 1 (Messages preached 22nd Aug 2011)
Aug 17, 2011

GOSPEL TENT 2011 – Dan Gillies tells his very interesting testimony of salvation as a young Glaswegian in his twenties, and Terry Topley follows with a stirring message on the love of God for guilty undeserving sinners from John 3:16 (Messages preached 17th Aug 2011)
Aug 16, 2011

GOSPEL TENT 2011 – Terry Topley preaches on the background, beauty and blessing of John 3:16. Dan Gillies preaches on 3 transactions – the birthright for the mess of pottage, 30 pieces of silver for Christ, and “Himself for Me” (Messages preached 16th Aug 2011)