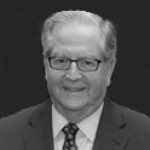 Born in 1933, Bill Lavery turned his back on the gospel as a teenager and “took his journey into a far country” seeking pleasure. Bill thought he “had it all”, as drinking, gambling and ballroom dancing filled his spare time. After marriage, he emigrated to the USA (in 1961), settling in Michigan. He secured a good job and enjoyed a “cocktail party” lifestyle into his early thirties. But God began to work in his life. Numerous people had been praying daily that, despite the passing of the years and the seeming lack of interest, Bill and his wife would be saved. You’ll have to listen to find out how it happened! Readings: Psa 49:6-10, Isa 55:1, Matt 14:25-32, John 3:16 (Bill visited us in Bicester in the 1970’s. This recording made in Wisconsin, USA, in 2016). (Photo: Detroit harbour, USA).

Previous
The Hidden Years of the Carpenter of Nazareth (21…
Next
"All I know is, my sins were taken care of at…