In this recording, made in 1961, Eric McCullough (1925-2020) tells how God saved him in Bangor, Northern Ireland, as a boy of 12, the day after a series of gospel meetings with David Craig had finished.

Eric’s father, James McCullough, was a preacher of the gospel who had moved from the UK to Nova Scotia, Canada, to preach the gospel. It was on a visit back to Ireland in 1938, young Eric was saved. 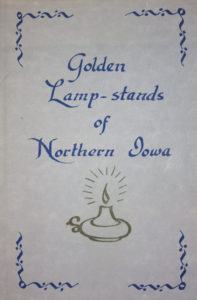 Back in North America Eric was drafted into the US navy during WW2, receiving an honorable discharge in June 1946. Then from 1951-57 Eric worked as a chiropractor in Cedar Falls, Iowa. Burdened to reach souls for Christ, in 1957 Eric was commended to serve the Lord full time, which he continued to do for the next 6 decades.

One particular series of gospel meetings which Mr McCullough shared with Leonard DeBuhr in Stout, Iowa, lasted for 16 weeks and around 50 souls professed to be saved. Ever after it was remembered as the “59 revival”. The story of these meetings, and many others, is told in the book Golden Lampstands of Northern Iowa, written by Eric’s friend, Leonard DeBuhr.