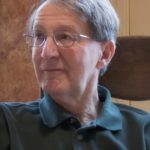 Frank Tornaquindici (1934-2019) was saved as a teenager on March 8th 1948. On a visit to the Larne Conference in Northern Ireland in 1998 he told his testimony, but with a difference. Rather than speak about himself, he told of the remarkable influence of his mother. Frank’s parents were raised in the Roman Catholic church, but God used an open air meeting to bring the gospel of the grace of God into the family. The godly influence of Frank’s parents is told here with warmth and effectiveness. Frank was in fellowship in the assembly meeting in Hartford, CT, USA (now Newington) for 70 years. He was a godly elder and, though a busy man in business, dedicated himself to the work of the Lord and the ministry of the Word. At the end of the recording you can here Arnot Caulfield leading the singing of “Lord to Thee my heart ascending”. Arnot led the singing heartily at the Larne conference for many years. (Reading: 2 Tim 1:5).
Previous
PART 2 – Gospel Hymn Singing (49 min)
Next
Bible Basics for Beginners – What can I do? (38…
Tomorrow Sunday AM: Breaking of Bread