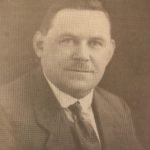 George Alexander (1894-1973) was born in Co Tyrone, Ireland, back in the 19th century. (His distinct localised accent may be a struggle for some listeners!). One day, as a mischievous and worldly young man, George made a plan with half a dozen other young lads to interrupt and disturb a series of gospel meetings being held in a barn near his home by evangelists J. McCullough and T. Braidner. But God intervened in George’s scheme. His companions never showed up, and George ended up hearing the gospel, being convicted of his sin and getting saved 2 weeks later on 10th September 1914. Some years later, George went out full time preaching the gospel and God used him in Ireland, and Scotland, and particularly in the Shetland Islands. In the book Whose Praise is in the Gospel, the chapter on George Alexander says of him, “George was not the type of man the schools of men would have accepted or sent to preach, but God, who is all wise, chooses and fits his servants; George was one of these. Eternity will reveal the full results of his visitation and work.” This fascinating recording of his testimony was made in the 1960’s.

Previous
Bible Basics for Beginners – What can I do? (38…
Next
Fruit Godward: Love, Joy and Peace (51 min)