Jim Allen grew up in Lurgan, Northern Ireland. As a young man raised under the preaching of the gospel he became quite indifferent to it. He would sit at the back of the Gospel Hall near the heater and sleep through gospel meetings. Then in his own words:

“When Mr. Harold Paisley and Mr. Joe Poots began gospel meetings in a little hut in Dollingstown, two miles from Lurgan, N. Ireland, an older cousin persuaded me to miss the cinema and ride [by bicycle] those miles on a wet October night to hear the gospel. Reluctantly, I went. I had heard the gospel from infancy yet that first meeting in that little hut lit by oil lamps brought impressions of eternity that made heaven and hell real to my soul. Nightly we sang truth that echoed in the soul on the dark homeward ride.

Eternity time soon will end.
Its fleeting moment pass away
Oh sinner say where wilt thou spend
Eternity’s unchanging day?
Shalt thou the hopeless horror see
Of Hell for all eternity?

“Impressions of passionate preaching, persistent prayer, and perilous procrastination would deepen in the heart until, months later, 5th August 1946, in a little bedroom in Lurgan, these issues of sin, salvation and eternity were settled when I grasped the personal aspect of the cross through the simple words – “CHRIST DIED FOR ME”. The gladness was real, the peace was real, the assurance was real enough to sing:

The torment and the fire,
Mine eyes shall never see.
I was a guilty sinner
But Jesus died for me!”

Some years later, hearing the call of God through a short but telling message preached by Mr Hawthorne Baillie at the Belfast Easter Conference meetings, Jim Allen surrendered to the Lord’s will and was commended full time into His service. He spent some years in Malaysia, eventually 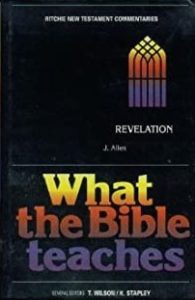 moving back to Ireland and travelling widely in the UK and around the world preaching the gospel and teaching the Word. He came to Bicester several times and always made a deep impression on us. He has also written a number of commentaries, his magnum opus being his Commentary on Revelation, published by John Ritchie Ltd., as part of the What The Bible Teaches commentary series.

Jim Allen often preached on the 7 churches of Asia (Revelation Chs 2-3). Here in this powerful message he preaches on a Christian martyr called Antipas (Rev 2:13) who stood against the godless culture of Pergamos and paid the ultimate price with his blood. Mr Allen urges us to stand against the godless pressures forced upon us today by the civil, intellectual and religious world, just as Antipas stood against the influences of Roman imperialism, Greek intellectualism and Babylonian ecumenism. His Scripture reading was Revelation 2:12-17.