Matthew Brescia (1938- ) from Connecticut, USA, relates the thrilling story of how God worked in his family in the first half of the 20th Century as the gospel flourished among the Italian immigrant community in New England through the preaching of men like Luigi Rosania and Cesare Patrizio. You will be gripped from the beginning to the end of this recording (made in the UK in 2009) as Matt Brescia relates the story of God’s grace in the conversion of his parents, grandparents and of others like Fritz Bjork, “Saint Augustine”, “Uncle Frank” and Peter Grimaldi. To God be the glory, great things He has done!

This is a 1955 photo of Italian/American gospel preachers standing outside the Gospel Hall, Charter Oak Ave, Hartford, Connecticut, USA. Some are mentioned in Mr Brescia’s message.

Another photo of a slightly different group: 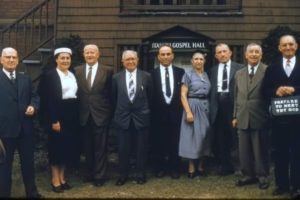