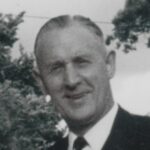 PART 2 of 6 – In the second of a series of 6 messages entitled “A Divine Foreview” Mr Fred Cundick (1907-1975) preaches on the “four beasts of Daniel 7), which give another outlines, in a different form to Ch 2, of the whole of the times of the Gentiles from the Babylonian captivity until the second coming of Christ. (Preached in Bicester in 1973)