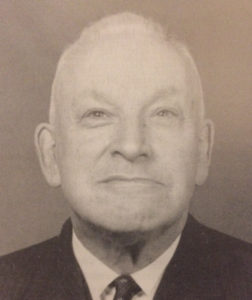 Robert Craig’s (1898-1987) life story is hard to take in. Running away from home in 1914, he “signed up” and joined the British Army. Sent off to France at the beginning of World War 1, he saw action at the battles of the Somme, Ypres and Saint Quentin, and survived 4 full years of conflict. He relates how, time after time, he was the only one who survived an attack, or a shell or some other mortal danger. Returning to Northern Ireland in 1919 he joined the Police and saw yet more trouble and violence, before moving into employment in a firm in Belfast in 1927. The colleague who worked beside him, a Mr Noble, was a saved man who lived an exemplary Christian life in front of Robert and often witnessed to him about the Lord Jesus. He invited Robert to gospel meetings in 1928 in which the evangelist, Mr David Walker of Aberdeen, was preaching. One night Robert was struck by the words “condemned already” from John 3:18 and came, for quite a time, under deep conviction of sin. He was finally saved on 17th November 1928 through the words of John 3:16. He then relates how he was baptised and saw the truth of gathering to the name of the Lord Jesus, before going out full time to preach the gospel until his homecall to glory in 1987. A wonderful story or God’s preserving grace and mercy in salvation.