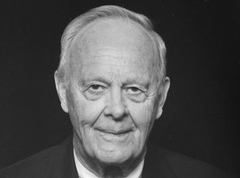 Andrew Bergsma (1930-2013) grew up in a “Dutch Reformed” home in Canada. His family endured poverty during the Great Depression. All 9 children were raised in the old fashioned way and walked 5 miles to church and back twice on the Lord’s Day. A lady from a nearby Gospel Hall saw the large family of children and visited with a rice pudding and an invitation to Sunday School. That was the opening for the gospel in the Bergsma home that eventually led to the whole family being saved. In 1950, 20 year old Andrew sat through 6 weeks of Frank Knox’s preaching, but had no thought about his soul. (Be sure to listen to a very amusing story about the hymn “Awake false professor” in connection with those meetings). The following year Andrew went one evening to hear Theodore Williams and Sydney Maxwell preaching the gospel. Listen to how God awakened and saved Andrew that night, on 11th October 1951. Andrew, who told this story after 45 years of preaching the gospel, also explains how God delivered him from doubts about salvation through 1 John 1:7.

Soon after being saved, Andrew crossed the continent of North America and joined Mr. Herb Harris in 1959 in Newfoundland on the gospel boat, the Missionary Gospel Messenger (see photo here). Greatly burdened for souls, in 1961 he was commended

to preach the gospel in the Netherlands where, with Lou Swaan, he saw many souls saved and the assembly in Dedemsvaart planted. In 1979 he moved back to Canada where he continued to preach the gospel, eventually settling in Manitoba where he worked tirelessly among the Hutterites. Andrew visited us in Bicester a couple of times and we never forgot his warmth and his infectious enthusiasm for the gospel. He used to say, “Some people have so little vision for going out with the gospel to other places, that if they could put the poles of the Gospel Tent through the roof of the Gospel Hall, they would!”